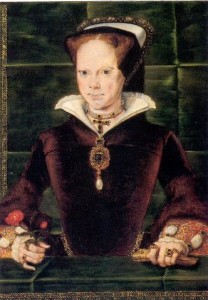 On 2nd August 1553, Elizabeth, second daughter of King Henry VIII, greeted her half-sister Mary, the new queen, at Wanstead. The women then spent the night at Wanstead House, a royal hunting lodge. The following day, 3rd August, Mary and Elizabeth rode from Wanstead to Aldgate for Mary to be greeted by the city as its queen.

Here are some primary source accounts of Mary I's entry into London on 3rd August 1553...

Henry Machyn, "citizen and merchant-taylor of London", recorded in his diary:

"[The iij day of August the Queen came riding to London, and so to the Tower; making her entrance at Aldgate, which was hanged,] and a grett nombur of stremars ha[nging about the said gate;] and all the strett unto Ledynhalle and unto the [Tower were laid with] graffvell, and all the crafts of London stood [in a row, with] ther banars and stremars hangyd over ther heds. Her grace cam, and a-for her a M. velvet cotes and [cloaks] in brodere, and the mar of London bare the mase, and the erle of Arundell bare the sworde, and all the trumpets [blowing]; and next her my lade Elssabeth, and next her the duches of Norffoke, and next her the marqwes of Exseter, [and other] lades; and after her the aldermen, and then the gard with bowes and gaffylens, and all the reseduw departyd [at Aldgate] in gren and whyt, and red and whyt, and bluw and gren, to the nombur of iij M. horse and speres and gaffelyns."

In The chronicle of Queen Jane, and of two years of Queen Mary, and especially of the rebellion of Sir Thomas Wyat, the anonymous "resident in the Tower of London", recorded:

"By a lettere written in London, reporteth that queene Maries grace came to London the 3 daye of August, beinge broughte in with her nobles verie honorably and strongly. The nomber of velvet coats that did ride before hir, aswell strangeres as otheres, was 740 ; and the noniber of ladyes and gentlemen that folowede was 180. The earle of Arundell did ride next before hir, bearinge the sworde in his hand, and sir Anthony Browne did beare up hir trayne. The lady Elizabethe did follow hir nexte, and after hir the lord marques of Exeter's wyfe.

The queenes grace stayed at Allgate-streete before the stage wheare the poore children stood, and hard an oration that one of them made, but she sayd nothinge to them.

My lord mayor and the aldermen brought hir grace into the city, my lord mayor riding next to the earle of Arundell with the mace in his hand. Theare was a greate peale of ordenance shotte of at the Towere.

It is credibly reported that the duke of Norfolke, Courteney, the bushope of Winchester, and my lady Somerset, mette the queenes grace at the Towere gate, and theare they kneelinge downe saluted her grace, and she came unto them and kissed them and sayd, 'Theis are my prisoners.' Courteney was made marques of Exeter, the 4. of thes present, as the brute goethe.

Hir grace intendethe to remove unto Windsor on Tuesdaye nexte, as I heare saye."

In his chronicle, Charles Wriothesley recorded:

"The 3 of August 1553 the Quenes Majestic came from Wanstead, and about vi of the clocke at night she lighted at Mr. Bramstons house at Whight Chappell, and there chaunged her apparell, and then, accompanyed with gentlemen, squires, knights, and lords, with a great number of straungers all in velvet coates rydinge before her, which were aboue v c. horse, with all the Kinges trumpetters, harrouldes, and sergeantes at armes, she proceeded to passe thorough the citye, and, when she came to the barres without Aldgate, there were rayles made where my Lord Mayor and his brethren the aldermen stoode, and at her highnes comminge, which was in rich apparell, her gowne of purple velvet French fashion, with sleues of the same, hir kirtle purple satten all thicke sett with gouldsmithes worke and great pearle, with her foresleues of the same set with rich stones, with a rich bowdricke of gould, pearle, and stones about her necke, and a riche billement of stones and great pearle on her hoode, her pallfray that she rode on richly trapped with gould embrodred to the horse feete, and another rich trapped pallfray led after her highnes by Sir [Edward] Hastinges, master of the horse, my Lord Mayor and Mr. Recorder, kneelinge afore her highnes at the entringe of the barres, saluted her highnes with a proposition after this manner, Mr. Recorder sayinge, "Pleaseth your highnes, my Lord Mayor, here present, in the name of his brethren and all the commons of this your highness city and chamber of London, most humbly beseecheth your highnes to be good and gracious Sovereign to theise commens of this your city lyke as your highnes noble progenitors aforetyme haue bene, and, accordinge to theyr bounden duety at your highnes cominge, my Lord Mayor presenteth here your highnes with the scepter perteyninge to the office, in token of loyalty and homage, most humbly wellcome your highnes to this your highnes city and chamber of London."

Then my Lord Mayor kissinge the scepter deliuered it to her highnes, she holdinge yt, answering, "My Lord Mayor, I hartely thanke you and all your brethren the aldermen of your gentlenes shewed unto me, which shall not be forgotten, for I haue knowne you euer to haue bene good toward me." And then she deliuered the scepter to my Lord Mayor againe, which words were so gently spoken and with so smylinge a countenance that the hearers wept for joye. Sir Anthony Browne leaninge on her horse, haveinge the trayne of hir highnes gowne hanginge over his shoulder, and all her footemen goeinge afore her and the guarde on euery syde; next her highnes followed the Lady Elizabethes Grace, hir sister, then the Duches of Norfolke, the Lady Marques of Exeter, and so great number of ladyes after them, euery one in their degrees. And when her highnes came against St. Buttolphes church, there was a great stage couered with canvas where all the children of Christes Hospitall sat, with all the gouernours and officers belonginge to the same: one of the children, salutinge her highnes kneelinge on his knees, made an oration to her highnes, in Latin. After she entred in at Algate, which was richly hanged with arras and set with streamers, the wayghtes of the city playinge in the battlements of the gate, her highnes then passinge to Leadenhall downe Gracechurch Streat, up Fanchurch Streat, downe Marke Lane, and so to the Tower; where, at hir Graces entringe at the stone, my Lord Mayor tooke his leave of her highnes, who rode allwayes before her highnes bearinge the scepter before the sworde with Garter Kinge of Armes rydinge with him; the Earle of Arundell bearinge the sworde before her highnes.

All the streates in London, from Algate up to Leadenhall and so to the Tower, were richly hanged with clothes of arras and silke, the streates gravelled all the way, and the citizens standinge at rayles with theyr streamers and banners of euery Company or occupation standinge at theyr rayles, euery Company in their best liueryes with theyr hoodes. Allso there were iiii great stages betwene Algate and the Tower where clarkes and musicians stoode playinge and singinge goodly ballets, which reioysed the Quenes highnes greatly. Allso there was such a terrible and great shott of guns shot within the Tower and all about the Tower wharfe that the lyke hath not bene hard, for they neuer ceased shootinge from the tyme her highnes entred in at Algate till she came to Marke Lane ende, which was like great thunder, so that yt had bene lyke to an earthquake. And all the streets by the way as her highnes rode standing so full of people shoutinge and cryinge Jesus saue her Grace, with weepinge teares for ioy, that the lyke was neuer seene before. After her highnes ladyes and gentlewomen came rydinge, which mett her Grace at Wansted Heath, aboue v m horse of noble mens seruantes, knightes, and gentlemen, euery one in his masters liuery, with speares and jauelinges, which rode three in a ranke, which was a goodly sight to behoulde. But when they came at Algate the Earle of Worcester, Lord Fitzwater, Sir William Croft, knight marshall, with typstaves, stayed them, and would not suffer neuer a Company to enter into the citye, but turned them back to other gates of the city to returne such as lay within the city to their lodginges, and the rest to such places without the city wher they laye, and thus this night fynished, which was on a Thursday."

It was a triumphant day for Mary. She had successfully removed Queen Jane from the throne and was being recognised as England's true queen.