August 22 – The end of John Dudley, Duke of Northumberland, and the Battle of Bosworth Field

On this day in Tudor history, 22nd August 1553, in the reign of Queen Mary I, John Dudley, Duke of Northumberland, was beheaded on Tower Hill along with his friends and supporters, Sir John Gates and Sir Thomas Palmer.

Northumberland was executed for his part in putting his daughter-in-law, Lady Jane Grey, on the throne.

His execution was actually scheduled for the previous day. The executioner was ready and a crowd had turned up to see him die, but the duke was taken to church instead.

Find out, and also hear a contemporary account of the duke's execution...

Also on this day in history, 22nd August 1485, the Battle of Bosworth Field took place in rural Leicestershire.

Find out what happened on that day...

You can also enjoy a talk from historian Nathen Amin on the lead-up to Bosworth, the battle itself, and what happened afterwards, by clicking here.

Posted in :  On this day
Tags :  Battle of Bosworth , Bosworth , John Dudley

August 22 – The end of John Dudley, Duke of Northumberland, and the Battle of Bosworth Field 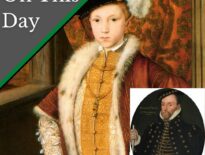 On this day August 21 – The Inventor of Britain