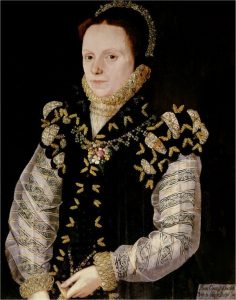 Lady Anne Russell was born the eldest of three daughters of Francis Russell, 2nd Earl of Bedford, and his first wife, Margaret St John. Anne’s father was an English nobleman and soldier who had a successful career at both the Henrician and Elizabethan courts. However, he came to significant attention during the reign of Elizabeth I; a monarch renowned for her taste in dashing, exciting and reliable men. Through this relationship with the queen, Francis was able to rise in status to the office of privy councillor. He also carried out diplomatic missions on the continent. Very little is known of Anne’s childhood, as much of the Russell family papers, for the sixteenth-century, are lost. When compared to other families, such as the Cecils, there is substantially more information on the education of William Cecil’s daughters than the Russell children. Any information regarding the Russell daughters’ education, including Anne’s sister Margaret, is practically unknown.

Anne, like many aristocratic girls of the sixteenth-century, grew up at an alarmingly quicker rate to adolescent girls in twenty-first century Britain. Puberty and teenage years were less understood as a period of growth and development as they would be today. As a result, Anne entered royal service at around the age of twelve. Her first position was as a maid of honour to Elizabeth I in 1559, following the queen’s succession to the throne. Six years later, at roughly the age of sixteen, Anne was married to Ambrose Dudley, Earl of Warwick, the fourth son of John Dudley, Duke of Northumberland. They married in the queen’s chapel at Whitehall Palace on 11th November 1565. The marriage was ultimately agreeable for both parties. Firstly, the Russell and Dudley families were devout Protestants, more specifically, adherents of Puritan theology. Both families observed this stricter form of Protestantism with Warwick’s sister, Katherine, opening her own Puritan school for young, impressionable ladies. The Dudley family had suffered tremendously in the previous decade, as a result of John’s treasonous activity; the former Duke of Northumberland was executed due to his involvement with the succession debate that gripped the early 1550s. This episode involved him lobbying support for his daughter-in-law Lady Jane Grey’s accession to the throne. The Dudley family managed to reassert their influence during the Protestant reign of Elizabeth I in the following decades, having essentially isolated themselves during the infinitely shorter reign of the Catholic Mary Tudor.

The wedding of Anne and the Earl of Warwick was a magnificent, celebratory event. It was arranged by her father and the Earl of Leicester, Ambrose’s brother, in the autumn of 1564. Queen Elizabeth sealed the marriage with her consent and blessing, and the wedding ceremony was recorded as a hugely elaborate and extravagant affair; somewhat ironic in terms of their Puritan faith that dictates simplicity. A degree of hope rested on this ideal union, for it was expected that it would produce Dudley heirs to continue the succession. Warwick was nearly twenty years older than Anne, a factor not unfitting for sixteenth-century standards, and had produced no children with his previous wives. Equally, Leicester was unmarried with no children, but instead spent time engaging in courtly love with the queen - Leicester and Elizabeth were notorious for their flirtatious behaviour at court.

Upon her marriage, the now titled Lady Warwick became a leading lady of Elizabeth’s inner court, ranking as a respectable countess in polite society. She was promoted, by the queen, to the position of Gentlewoman of the Privy Chamber, an enviable role that enabled her direct access to the queen; which involved dressing and underdressing the queen in the intimate spaces of the queen’s chambers. Writing in the seventeenth century, her niece, Lady Anne Clifford, emphasised the bond between Lady Warwick and the queen. She stressed that Lady Warwick was ‘more believed and in greater favour with the Queen than any other woman in the kingdom, and no less in the whole court and queen’s dominions’. While the queen was evidently fond of the countess, Lady Clifford could be exaggerating this friendship to stress the importance of her family’s lineage and history. In terms of their marriage, the countess’s relationship with her husband appears to have been particularly harmonious and successful. According to Sir Edward Stafford, who came to visit the dying Warwick on his deathbed in 1590, he found the countess ‘sitting by the fire so full of tears that she could not speak’; the countess was distraught with grief.

Similarly, Lady Warwick enjoyed a warm relationship with the remainder of the Dudley family, and was fond of the dashing Earl of Leicester. An example of this is evident from Leicester’s first will (1582), held in the Longleat Estate archives. It states, 'my noble & worthy sister the countys of Warwyk at whose hands I have ever found great love & kindnes [a gift worth 100 marks] praying hir to accept yt as from hym that in his lyffe tyme did both honor & esteme hir asmoch as any brother did his syster'. It was courtesy for brother/sister in laws to reference each-other with the same sincerity as if they were blood-related, as is shown in this extract.

During the 1570s and 1580s, the Earl and Countess of Warwick lived at both North Hall in Northaw, Hertfordshire, and at the royal court. Lady Warwick, unfortunately for the Dudley succession, produced no surviving children throughout her extended marriage to Lord Warwick. However, this inconvenient lack of children meant that Anne was able to perform her primary duty at court; serving the queen. What solidifies the knowledge that Lady Warwick was one of the queen’s preeminent servants is that she was permitted to attend on the queen while the latter was dying on 23/24th March 1603. By this time, Elizabeth’s court had become an unfashionable and aged institution. The formerly formidable monarch was the head of a declining court by the 1590s; rarely replacing, or introducing, young courtiers to the court as a result of her anxiety and untrustworthy nature. This was understandable, as throughout the entirety of her reign there were numerous assassination attempts against her mortal body, fuelled by political and religion unease.

Upon the queen’s death, there was apprehension among the remaining, elderly court ladies regarding their future employment. Lady Warwick was reportedly fearful that her position would be in potential jeopardy; that she would have to retire into private, country life. Lady Clifford later remarked in her papers that Anne of Denmark ‘shewed no favour to the elderly ladies’. However, the successor to Elizabeth did indeed employ a minority of the former queen’s ladies into her household. It was only a year after the queen’s death that Lady Warwick herself became suddenly ill and retired to North Hall, with ‘something ill and melancholy’ in her disposition; as stated by Lady Clifford. The countess died at the same location on 9th February 1604, childless and fourteen years after the death of her husband.

From the scarce primary sources that document the countess’s life, we can see that Lady Warwick led a comfortable and content life, both domestically with her husband and dutifully at court. In a period that emphasised fertility as the pinnacle of female success, Lady Warwick failed in this vital department by producing no surviving heirs. Regardless, she became an active participant in the patronising of varying types during her life. These included: Puritan divines and poets, significantly Edmund Spenser, author of “The Faerie Queene”. Additionally, she undertook involvement in wardships, lawsuits and book dedications, the latter likely being in honour of her virtuous and respectable nature, as wife to a leading Elizabethan magnate. At her own request, she was interred alongside her Russell relatives at Chenies, Buckinghamshire, not with her husband; the reason for this is unknown. An alabaster effigy and altar-tomb of black marble were then erected in her honour.