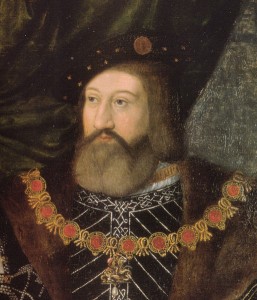 Charles Brandon was one of King Henry VIII's most trusted advisors and friends. He married the king's sister, even when he had been trusted not too, and eventually married a lady thirty-five years younger than him.

Being someone who was so close to Henry VIII, what was Brandon's real purpose? What did he achieve in his lifetime? And, how did he rise so high?

Charles Brandon was born around 1484 and was one of two sons born to Sir William Brandon and Elizabeth Bruyn of South Ockendon. His father was Henry VII's standard-bearer at the Battle of Bosworth in 1485, which is where he is said to have been killed by Richard III himself. King Henry VII saw how loyal William had been to him, so, therefore, chose to repay this debt by having his son, Charles, brought up at his court. Charles was just two years older than Henry VII's eldest child, Prince Arthur, but when Arthur married the Spanish princess, Catherine of Aragon, in 1502, Charles did not join them at Ludlow Castle. Instead, he stayed in London and got to know Arthur's younger brother, Henry, Duke of York.

On 2nd April 1502, Prince Arthur died after just a few months of being married to Catherine; his family were heartbroken. Henry VII died seven years later, on 21 April 1509 and the young Duke of York, Henry, came to the throne as Henry VIII and thus began a long friendship between king and courtier.

In 1505, Brandon had become betrothed to a lady named Anne Browne. Anne's father was Anthony Browne, Constable of Calais, and her mother was Eleanor Ughtred. Brandon and Anne proceeded to sleep together, thus consummating their betrothal and making it a valid marriage in the eyes of the church even without a marriage ceremony. Anne gave birth to a little girl in 1506. However, in 1507, Brandon went on to marry Anne's aunt, Margaret Neville, Lady Mortimer, who was a very wealthy widow. Eventually, the marriage to Margaret was annulled and Brandon returned to Anne and married her in a ceremony that was public and well attended. They proceeded to have another daughter in 1510, but Anne passed away in 1512.

In the year his wife died, Brandon rose to become King Henry VIII's Master of the Horse, taking responsibility for the king's horses, and also for court jousts and hunting. Brandon then proceeded to rise in court to become Viscount Lisle in May 1513. In 1514, he was made Duke of Suffolk after helping Henry VIII in the Siege of Tournai, where he had successfully convinced the citizens to surrender the city. The Yarnborough Portrait of Mary Tudor, Queen of France, and Charles Brandon

That year was around the time that Suffolk began to get close to Henry's sister, Mary Tudor. Mary was the youngest of Henry VII's surviving children and was considered to be the most beautiful princess of her time. She was eighteen years of age when it became widely known at court that Mary had some attachment and feelings towards Suffolk. However, in October 1514, Mary married fifty-two-year-old King Louis XII, first securing a promise from her brother that when King Louis was dead, she could choose to marry whoever she saw fit. Her brother agreed. She was crowned Queen of France on 5th November 1514.

Mary's marriage lasted just 82 days because on 1st January 1515 King Louis died. Arrangements were made for Mary to be escorted home and Suffolk was sent over to France to collect the Dowager Queen of France. Arriving in France on 27th January 1515, Suffolk first had a private audience with the new French king, Francis I. Francis informed the duke that he had a confession from Mary during her seclusion and that Mary had confessed that she had feelings for Suffolk. Francis offered to be a friend to both Mary and Charles, saying that he would write to Henry VIII and explain the situation. In February 1515, Suffolk and Mary married secretly in Paris without Henry VIII's permission. Initially, Henry was furious; Suffolk had gone behind his back and not just with anyone, with the king's sister.

The newly-weds were forced to pay a heavy price. From Calais, Mary wrote to her brother and reminded him of the “great and tender love” they had always shared with one another as brother and sister. He undoubtedly sent permission for both Suffolk and Mary to return to England. Upon their return, they were informed that they were to pay back the expenses paid out for her first marriage (a total of £24,000 which would consist of an annual instalment of £4,000) and that Mary must return all the jewels she had received and the other gifts that King Louis had given to her. Overall, Henry was happy with the arrangement in place; he was just unbelievably angry that Suffolk had gone against him and broken his word. On 13th May 1515, Suffolk and Mary married at Greenwich Palace and in March 1516 Mary gave birth to Suffolk's child, a boy which she named Henry after her beloved brother. They went on to have three more children: Frances in 1517, Eleanor in 1519 and a second son, also named Henry, in around 1523. Their first son died in 1522.

Even though he provoked the king's wrath with his secret marriage to Mary, Suffolk continued his rise at court. In 1529, people at court were saying that Suffolk was a leading opponent to Cardinal Wolsey, the king's other trusted advisor. Suffolk was present when the cardinal was removed from power that year in the October and he became one of the king's leading counsellors. In June 1533, Suffolk suffered the loss of his wife Mary. Mary had suffered from sweating sickness in 1528 and it is thought that she never completely recovered from it. Some historians believe that she may also have been showing signs of having cancer. Despite his recent loss, Suffolk went on to remarry in September 1533. He married his ward, Catherine Willoughby, who had previously been betrothed to his son, Henry. Catherine was only fourteen years of age at the time, and Suffolk was significantly older, being forty-nine. Not long after his marriage, Suffolk's son Henry died, but in September 1535, Catherine gave birth to a son and the couple named him Henry.

In the 1530s, Suffolk was caught up in the king's business of trying to get his marriage to Queen Catherine of Aragon annulled. In April 1533, Suffolk was sent to to tell Catherine of Aragon that she was no longer queen and in December of that year he was tasked with removing some of her servants. This is something that did not sit well with Suffolk for he was not a supporter of Anne Boleyn, the new queen, and he had a lot of respect for Catherine of Aragon.

Suffolk attended the trials of Thomas More and Anne Boleyn, and attended Anne's execution in May 1536. In autumn 1536, he helped the king with the Pilgrimage of Grace rebellion. Suffolk was sent to Lincolnshire to deal with the rebels there, but come the time he was ready to actually fight, the rebels had dispersed. He then entered Lincoln where he was said to have pacified the rest of the people and proceeded to investigate the reasons for the uprising. After the rebels began to disperse, following the king's pardon, Suffolk was able to return to court. Over 200 people were put to death over the Pilgrimage of Grace, including lawyer Robert Aske, who was hanged in chains. During Suffolk's time away dealing with the rebels, Catherine gave birth to his second son, who was named Charles after hs father.

Even in his later years, Suffolk was still on the rise, being appointed the great master of the household in 1539, meeting Anne of Cleves on her arrival in England in December of that year, and being one of the people who helped dissolve her marriage to Henry. His health, however, was quite poor come the 1540s and on 22nd August 1545, the Duke of Suffolk passed away in Guildford. Suffolk had wanted a quiet ceremony, but Henry VIII paid for and planned the service. The two men had been close friends from youth and had remained so despite the difficult situations that could have impacted their friendship.