2 January – A visit for the dying Catherine of Aragon

On this day in Tudor history, 2nd January 1536, imperial ambassador, Eustace Chapuys, visited his good friend, Catherine of Aragon, first wife of King Henry VIII and a woman who was now officially called the Dowager Princess of Wales.

Catherine was seriously ill, in fact, she was dying, and this would be the last time that Chapuys saw her.

Find out from Chapuys' own account what happened in the four days he spent with Catherine of Aragon.

Also on this day in Tudor history, 2nd January 1492, the Moors surrendered Granada to the forces of King Ferdinand II of Aragon and Queen Isabella I of Castile. Find out more about this in last year's talk:

On this day in Tudor history, 2nd January 1536, Eustace Chapuys, the imperial ambassador, arrived at Kimbolton Castle. He was there to visit his good friend, Catherine of Aragon, the former wife of King Henry VIII who was now officially called the Dowager Princess of Wales, although she still referred to herself as queen.

Catherine was very ill and Chapuys spent four days with her, spending two hours every afternoon with her. He wrote to his master, Charles V, Holy Roman Emperor, of his visit in a letter dated 9th January 1536. Here is what he wrote:

“As I stated in my despatch of the 30th of December ultimo, almost immediately after closing it I mounted my horse in order to repair in all possible haste to the Queen’s residence, followed by a numerous suite of my own servants and friends. Arrived at Kimbolton, the Queen sent immediately for me; and lest people should imagine that her illness was a feint, and also for fear of a friend of Cromwell’s whom that secretary had sent to accompany me, or rather to act as a spy on my movements and report what I might say or do during my visit, she (the Queen) was of opinion – as I also was – that the said guide, as well as the principal officers of her household, such as her own chamberlain, who had not seen her for more than a year, and many others, should witness the interview. After making my reverence, and kissing the Queen’s hand, she was pleased, out of sheer kindness and benevolence, and without any occasion or merit it on my part, to thank me for the many services which, she said, I had rendered her on former occasions, as well as the trouble I had taken in coming down to visit her, at a time too when, if it should please God to take her to Himself, it would at least be a consolation to die as it were in my arms, and not all alone like a beast.

I failed not to give her on this occasion all possible hope of a speedy recovery, as well as of the prospect there was of her being shortly removed to other quarters, since the King, of his own accord, had recently offered to let her choose among various royal manors of his own that he named to me, and likewise to pay certain arrears of pension due to her, adding for her greater consolation that the King had been very sorry to hear of her illness.

After this I entreated her to take courage, and do her best to get well. If not entirely for her own sake, I said she ought at least to consider that on her recovery and life depended in a great measure the union, peace, and welfare of Christendom, To enforce which, I made use of several arguments. as previously preconcerted between her and myself, through the intermediary of a third person, all this being said aloud that the guide I have alluded to, and several others present at the interview, might, if necessary, report our conversation, and my words be the cause of greater care being taken to preserve her life.

After some more conversation on the above topics the Queen bade me retire and rest after the fatigues of my journey. She herself longed for some, as she had not slept two hours for the last six days. Not long after this she again sent for me, and we talked together for two long hours; and I must say that although, for fear of overtiring her, I made several attempts to get up and leave the room, she would not hear of it, saying that I afforded her great pleasure and consolation by remaining where I was.”

The letter continues, and I’ll give you a link to read the whole letter for yourself, but Chapuys explains that he left after four days because Catherine was “evidently getting much better”, in that her stomach was retaining food and she was getting some sleep. Her physician also believed that she was out of danger. Chapuys added that he thought he ought to leave “not only in order not to abuse the permission granted to me by the King, but also to ask for a better residence for her, as promised at my departure from London”.

Unfortunately, Catherine’s improvement was shortlived and she died on 7th January 1536.

In last year’s talk, I spoke about the surrender of Granada on this day in 1492 to the forces of King Ferdinand II of Aragon and Queen Isabella I of Castile, so I’ll give you a link to that.

Posted in :  On this day
Tags :  Catherine of Aragon , Eustace Chapuys

2 January – A visit for the dying Catherine of Aragon 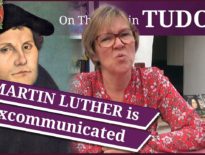 On this day 3 January – Martin Luther is excommunicated… On this day 1 January – Henry VIII’s disastrous me…