On this day in Tudor history, 29th November 1530, at around 8 o’clock in the morning, Cardinal Thomas Wolsey, Henry VIII’s former Lord Chancellor, died at the Abbey of St Mary de Pratis, Leicester.

Cardinal Wolsey, who was in his fifties, cheated the executioner by dying a natural death while on his way to London to answer charges of treason. He surely would have been tried and executed had he reached the capital.

Find out about Cardinal Wolsey's death, and who ended up being buried in the sarcophagus he'd had commissioned, in today's talk.

You can find out more about his downfall and arrest in this video from 4th November:

On this day in Tudor history, 29th November 1530, at around 8 o’clock in the morning, Cardinal Thomas Wolsey, Henry VIII’s former Lord Chancellor, died at the Abbey of St Mary de Pratis, Leicester. He was in his late 50s.

Wolsey had been arrested at his home, Cawood Castle, on 4th November 1530, and taken into custody by the Earl of Northumberland and William Walsh. He bade farewell to his household on 6th November as he, Northumberland and Walsh set off for London, where he was due to answer charges of treason. They travelled from Cawood to Pontefract and Doncaster, and then to Sheffield Park, home of the Earl of Shrewsbury, arriving there on the 8th. By this time, Wolsey had been taken ill with dysentery and so the group stayed at Sheffield until 24th November. In the meantime, Sir William Kingston, Constable of the Tower of London, had been dispatched from London to escort Wolsey to the Tower and he arrived at Sheffield on 22nd.

When the cardinal had recovered enough from his illness, the group travelled on to Hardwick Hall and then Nottingham. By 26th November, Wolsey’s health had taken a turn for the worse and when they arrived at Leicester Abbey, Wolsey allegedly told the abbot, “Father abbott, I am come hither to leave my bones among you.” He spoke the truth. On the morning of the 29th November 1530, after making his last confession, Wolsey said his famous words:

“I see the matter against me, how it is framed, But if I had served god as diligently as I have done the king, he would not have given me over in my grey hairs.”

In his last hours, Wolsey was worried about the heresies he felt were taking root in England, so before he died he asked Sir William Kingston to advise the King to act against them. He then lapsed into unconsciousness and the abbot performed the last rites. He died at around 8am. His body was laid out in his pontifical robes for people to see before he was buried at the abbey, where he still rests today.

Historian J.J. Scarisbrick writes of how Wolsey “cheated his master of the final reckoning” by dying naturally before he could be tried for treason, and presumably found guilty and executed.
And Sidney Dark, in his 1935 book on Wolsey, writes: “The London crowd was robbed of the sight of his death upon the open block, but there were no doubt great rejoicings on the night that the news of his death reached the capital. Only among the Yorkshire villages had Wolsey set a new light burning in the evening of his life, a light that was remembered long after he had gone from among them, in the form of happier and more prosperous homes; and it may not count for nothing in the final scale of things that a few tears were shed for him, when the news of his death came to London, by a poor fool in the King’s service who mourned the death of a kind master.”

It was a sad end to someone who had served his king faithfully for many years, but at least Wolsey had died peacefully in bed, rather than on the scaffold. His burial in Leicester meant that he was denied the black marble sarcophagus he had commissioned. Henry VIII planned to use the sarcophagus himself, but this never happened and it now houses the remains of Admiral Horatio Lord Nelson, who was laid to rest in it in St Paul’s Cathedral after his death in the Battle of Trafalgar in 1805.

By the way, it really is a myth that Wolsey committed suicide, as depicted in Showtime’s series “The Tudors”, and there is nothing to suggest that he was poisoned either.

Posted in :  On this day
Tags :  Cardinal Wolsey , Thomas Wolsey 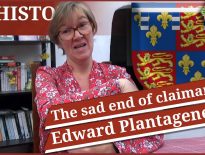 On this day 28 November – The sad end of claimant Edward…